Portrait by Kugelblitz, after Paul Kidby

Ryde Cleans House
(or: How The Dwarf Came Home, Broke His Curse, And Made Up With His Wife)

These young ones, they do not know me. They would not know me, for I am cursed. I have been the bearer of this weight for over 10 years, away from my wife, my children, and all my kith and kin. All my old friends are dead or missing. I have slain many of my enemies, lost an arm, lost an eye. I’ve come close to dying. I’ve been dead.

Long ago, and sometimes only yesterday it seems, I traveled to Stygia. We were foolish, we thought we could save the world, and we took the words written in a book and we went. The words were “Jocelyn, son of Tynian, here is your task. Seek first the Atame of Iskirl, which was lost in the Vilayet Sea. Only this can be used to remove the Oriel of Rileh which is in the narthex of His temple, the Temple of Morning Woe.” This we did, and we were in that temple, and we interrupted the ritual to that Elder Thing, and I killed a priest. With his dying breath, in the temple of his god, that priest made his curse upon me. I was not to be remembered after that, as if I had never been.

I found out the way to break the curse. The first thing to do was get an object, some symbol of the curse, from a priest of that religion which worshipped snakes. I went back to Stygia, I found such an object, a nail from one of their churches. I was going to bring it back home to my mountain, and pray to my own god, and break this curse.

And then the riot started.

I killed one of the Prince’s guards.

I was struck down.

I woke, as if from a dream, 10 years later. I had been a slave, and a smith, and also an executioner. At first I had no memory of these events, and I was not aware of them while they happened, but I did these horrible things with my hands. I escaped. With only my armor and my axe I went North, away from the desert and towards the mountains. Along the way I traded a mithril link from my chainmail for a cup of water and a blanket from a Brownie. I went through an ancient city and lost my beard in the tunnels there. I met with a tribe of hobgoblins, who knew I was heading back to my mountain because of a dream and gave me a pony. Eventually I made it to Eaglesreach. Again I worked. First on tools, then on knives, then on bigger weapons, showing Wysart the Master Smith the skill I’d been perfecting. He told his patron, Lord Arasham, of my skill and I was entered into the smithing contest that happens every year for the price of a pound of gold. I showed them the axe I’d forged in Belegost and they doubled their bets. I won the contest. Now I was a Master Smith, and now I had the money to make my way home.

[The Journey and events at Landsrue documented in other places.]

Now I had traveled from Landsrue, the ring gotten from the DarkMage [Ryde’s addition — he is the Lieutenant of the Night Watch —Kugelblitz] David Powys a constant reminder of my renewed purpose. We had traveled the Deeping, these humans and I, made our way past Banghall and through Shelteburgh, narrowly avoided becoming dinner for an ogre and found cause to take the lives of some orcs on the pass. The snows had started falling and work on the surface would be stopped for a little while. It was still not me that the guards at the bridge recognized, nor the guards at the entrance to the Great Halls. No, I was not remembered, but my mark had become that of my Lady. By that way her family I still remained, although confusing to some who could remember the 2nd and 4th brothers Tethamagrion, but not the 3rd. For their safety I asked my companions to wait in the atrium, among the priests while I prayed to my Sovereign, Clangeddin, throwing the rag soaked with my blood-sweat into the brazier for his honor. I had not lost this battle, and by His grace I would have the strength to persevere in this next one. So it was to the Book I went, cloaked in the shelter of invisibility this ring of Moraddin gave me, only to find the Book locked and the only key with my Lady. I had wished to spare both her and myself the pain of meeting under the curse, but if I was to get help from the Book I would need to talk to her. Through the kitchens and into her parlour I went, announced by her attendant. Looking once again upon the face of my beloved I would try to convince her, to gain her help, and all for naught. Something, the curse, the strength of it where I was not supposed to exist was too much. I could not follow her where she would go, I would not get help from the book. Once again I was alone. All I had done, all I had gone through, all my armor and weapons and riches were worth nothing. I knew it would require two things, this ring and Dimrost. And so I went, cloaked once again, to the Rainy Stair. My armor I shed, my weapon laid down, my clothes and any other manner of help I put aside. Naked I went into the pool, wearing only the ring, seeing nothing in my future as I went under the water. I was baptized once again by the Mountain. I understood that I was in the Holiest Temple of my God and being bathed in its light. And in this light I saw it, the nature of my curse in its form and its strength. A great black snake wrapped around me, biting into my neck and coiling around the world I lived in and stretching in different directions to taint the minds of the people throughout my world and keep me from them. My weapons and armor in another place, I only had my own strength and it would take every extra bit of effort and will to fight. The curse did not leave me willingly. I pulled at its head and it would try to bite deeper, I would push at its coils and it would try to squeeze harder. I was strong, but barely strong enough as it seemed I would break my own spirit with my exertions before the snake would come loose. Even after I managed to pull its fangs from my skull and hold it from me it was struggling against my grip to try and curl around me again. I was in the temple of my God, and my God has weapons and a golden ax seemingly resting at the bottom of the pool. This was sharp enough and in my grasp would hew through scale and flesh, and with the head of the snake off the curse was broken. Silver light shone outward from me, from this axe, from the pool itself at the moment I broke the curse, leaving broken fragments of iron where the ring that was the curse once was. I was cold, half-drowned, scarred on the finger that had borne the ring, but I was free.

But this freedom would come with a price. Rising out of the pool I dressed and went through the passages from Dimrost to find all my people asleep, probably from the strain of missing memories having just been lifted from their minds. On my way I found one awake, an old friend who knew much and had told me long ago how to break the curse. His eyes were sharp, his hearing precise and keen, his smile warm and friendly. He was happy for me having been unsure how I would emerge from the pool at Dimrost, but warned me of the work I still had to do. He also let me know more of the Mountain, and that in binding myself to it I would be unwise to leave it again. I believe he used unwise as a gentle word, for I had taken too many oaths and had let certain forces become more aware of me than I should. The war against the Dark would be for someone else to fight now, my part was done.

The curse now broken, there were matters to be attended to.

[Troop Movements: to be added]

During the next 9 days there was a gift sent (each made by Ryde) each morning with Gillian’s 2nd breakfast.

Ryde will ask Gilly to sit down and will tell her about using the book and T’Grana’s dimension and what it did and what he gave up and how it led him to the ring and the breaking of the curse. Then he will tell her of the evening after visiting T’Grana and how at the time he was thought of as dead and forgotten with no way of knowing if she had re-married and the lack of will to resist. Ryde cannot make up for the 10 years he was away, and no amount of gifts can equal the indiscretion he has committed. He’s sorry, and she can either take the ring and they can renew their vows (after all, he WAS dead) or she can take the rolling pin and start beating him about the head with it.

The conversation that followed between Rydetalin and Gillian Clay involved some breaking of crockery, some ducking, and eventually some talk about a visiting dwarven Lord. Yes, he had been very attentive and courtly, but it wasn’t the same. It wasn’t Ryde. So, what can a dwarven Master Smith offer a halfing Gourmet Matron? How about a skillet that doesn’t rust. How are they doing? They’re expecting their 4th child. 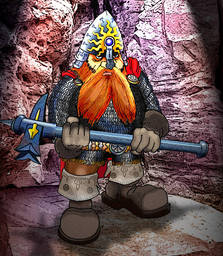