Age 29, born and raised in the village of Dun Llyryn (valley of the fox) in Wundt; Matthew has been a forester, hunter, mercenary. Has 4 older brothers. Mother (April) died in childbirth when Matthew was 5 giving birth to Wade. Because of complications and loss of blood Wade was simple. The older brothers moved out at this time and Matthew and his grandmother Elsa raised Wade as best they could, sometimes with help from Nuns of Sagron who resided at the chapter house in nearby Dun Myrdwyn (valley of the hawk). When Matthew was 12 his father, a hunter for the local lord who was injured while hunting and given rights to trap and hunt on the land as recompense, remarried to a woman named Stella who had 2 daughters. Needless to say, the single room thatched hut became crowded. All the older brothers had moved out by this time. 2 years later, during a particularly harsh winter while the father was away at the trapper’s cabin, Granny Elsa died, leaving Matthew to fend for his brother and himself. Shortly thereafter, Stella and her daughters started to run the household, badly. What little money the Grimes family had was spent without care, things that had belonged to each of the Grimes brothers were broken or thrown out, arguments over the care of Wade were common and became the source of anger and frustration for Matthew. On a day during this same winter, Matthew returned to the cottage to find Wade being beaten by his step-sisters. Pulling them away, he was struck in the arm with the fire poker and lashing out in defense struck his step-mother in the face, sending her across the room. With a leer she said to Matthew, “I can’t wait ’til your father gets to see this”, holding her quickly bruising jaw. Matthew did not wait. With nothing but the clothes on their backs Matthew and his brother left the cottage and headed for the Sagronian chapter house, to leave Wade with the only people that could still be trusted. Wade has spent the intervening years as a layman at the chapter house. Matthew found work with whatever army would take him. Neither has seen the old cottage at Dun Llyryn or their father since. Matthew has been able to visit Wade and provide some services to the Sagronian nuns for a month every year, but Wade’s health has never been good and gets worse with every visit. It’s only a matter of time. 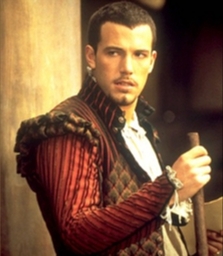