This is the story of how I learned that I would be a shaman. When I was growing up, I was never interested in being an acolyte. It seemed to me that it was the path of the small, the weak, those who could not hunt. I saw the shaman take his full share from the group hunts, and I felt that this was the unearned meal of a weakling.

The year of the slow thaw was long ago, when I was more child than man. The snow was thick on the ground, and the game was thin, which meant that hunger was stalking the tribe. I was young, I was hungry, and I desperately wanted to go along with my father on his solo hunt. I was determined to hunt my way out of hunger, instead of waiting in the village with the women and children. My father said that I was too young, it was too dangerous, and besides, I would just scare away the game.

And so I snuck out and followed my father. It was easy to follow his ski track through the snow. I kept my distance and I drew great joy form the fact that he did not realize that he was being followed. I was stalking the stalker. I could see in the distance that he had come upon some tracks, and he followed them to an opening in the snow. As he waited in silence, I rehearsed in my head how I would reveal that I had successfully stalked him without scaring the game, or being hurt or complaining of the cold. It would prove that I was no longer a child to be left home.

And so he speared a badger as it came out of its den, because it too was looking for food. My father gave a prayer of thanks to the spirit of that badger for giving itself up to him, and then he did something strange. He gathered up branches and built a fire. It wasn’t until he put a green branch through the badger as a spit that I realized what he was doing. He roasted the badger, ate it, and then chewed on some bark to eliminate the smell from the breath. As I returned home, tears froze to my face.

When he returned home, I heard him tell my empty bellied mother that he didn’t catch anything. When she smelled the pine bark on his breath, she smelled the desperation of a man so hungry that he would eat bark. I smelled only lies. That night, as I lay in bed, I swore by every spirit that I knew, and many that I didn’t that he would know true hunger and pain.

Several days later, during a group hunt, the hunters of the village stalked a bear, which had come out of its den looking for the spring, which was so late in coming. They had spread out to make sure that the bear couldn’t escape. When the bear saw my father, and my father saw the bear, they both saw the same thing: a meal, which would keep hunger away. My father’s spear slipped in his hand so he was the prey that day. He truly learned the power of hunger as the bear ate his face.

The bear didn’t escape the hunting party, and they caught it and brought it back to the village to eat. During the feast, everyone had good words to say about my father: what a good man he was, how good a hunter. Everyone thought that my silence was merely childlike despair. In the weeks that followed, as I spent my time with the shaman instead of in hunting and tracking lessons with my uncle, my friends assumed that after my father’s death I was afraid and too scared to go hunting. I was afraid but not of the dangers of the hunt. I was afraid of my own power. 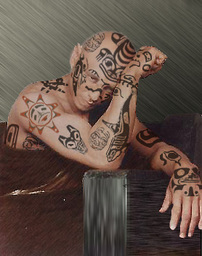