“Bertie” muses, while Owen the magician polishes the dragon skeleton, having been forbidden to ‘help’. It is Guyekoni 13, 997.

At least I shall have a good story when I get home… er… perhaps not. Bart might get vexed with me if I make it sound as though I had jolly adventures without him. But, when I am aged, I shall have many fine stories to tell to my grandchildren.

If I am to have grandchildren, if Father is not too furious to even think about finding a marriage for me… Nonsense! In good time all will be forgiven. I shall have my marriage, and this will become my adventurous past.

…In MY day… I shall say that quite a lot. In MY day we lived in Ruddlan Castle, in Whiting Arran… I wonder if I will look at the countryside and remark how much more beautiful it was than here, do all Grandmothers do that? In any case, I shall say…

I was a fencer, you know. That was quite an uncommon pasttime for a woman in MY day. But my twin brother Ewen and I were very close. He often called me ‘Birdie’, for Lynnet (or Linnet), don’t you see, and I in turn called him ‘Bart’. When we were quite small, he insisted that we were always together, even in schooling and sports. We would often go hunting together. I even took to wearing boy’s clothing, to better be able to keep up with him on horseback – riding side saddle is well enough, but not when you’re gallivanting all over the countryside…

Father did not object, as long as I had those accomplishments expected of a Duke’s daughter. Father had only one son, you see, and six daughters, so, although he took ample care of all our happiness and welfare, dear Ewen was much indulged, and I was his companion of choice. Not that I objected, mind you. I found both parts of my schooling to be most agreeable.

…Then I shall wink at my grandchildren, to show that I do remember what being schooled was like.

…Well, I shall say, perhaps not history, so much, and I never could abide by numbers, but I was always extremely fond of dance. Swordplay, you see, is quite a lot like dance without music. But you need not worry about being misunderstood if you smile too much, don’t you see. I have always been amazed that it is not recognized as a proper feminine accomplishment.

Ewen and I were twins, as I have said. Our eldest sister, Isobal, was married to… Yes, of course, you know who is who, but do let me go on… Isobal, Giorgiana, Evaline and Vivien were Adela’s daughters, but she died in the child bed, so father married Marilyn, and she bore him Gwynneth, who was quite the beauty, and then Ewen and myself. At the time of this particular trip Isobal and Giorgiana were both well married… perhaps I shall gossip slightly and say ‘though Giorgi perhaps not quite so happy as Isobal, but still well enough’… Evaline had been called a few years before into the service of the Dancer, and went with Father’s blessing. I do recall that my own dear Grandmother objected, though she would have been happy to have a child in service to Mitras, but I’ll save that tale for another day… Vivien was… not so well married.

At this point, I shall take on a cautionary tone. She really brought it on herself, I will warn them. She had taken it into her mind that she was to be schooled in Magicks, and that if Father wouldn’t arrange it, then she would only accept a husband who would. She used to claim that she had the sight, and that she must have the power. I could not say one way or another, but I can tell you that I was greatly frightened of her temper, as she was quick to find fault, and really could say and do the most cruel things. I remember once that she locked Gwynneth… well, perhaps I shouldn’t tell that tale…

But I shall be certain to tell them that Vivien made herself unpleasant when men came to pay her court, and that she was well over sixteen when Father gave his consent to the first man who asked for it and did not withdraw his request, and that she was taken away to B’sheim, and I thought that I should never see her again. And once Father gotten rid of her Gwynneth was very nearly of marriagable age, and the Fitzalans had just married one very difficult daughter… You can see how complicated it all became.

As I said, Vivien’s marriage was not a happy one. Nigh on two years afterwards, father sent me to visit with her and her husband, one of the Ancaster Franklins, named Odo….

Oh, dear. What will I tell them about my poor sister and her dreadful husband? Could I really tell them that he beat her frequently? That I suspected that was why she had lost the baby, and sent for me? Ah, well, I have years to decide the best way of putting it. But I can say…

…Ancaster was dreadful for my sister. She was surrounded by Beltisheim women who were not filled with understanding for Eire, and she did not have the temperament to make friends even under the best of conditions. She had brought her own maid there, of course, so when I arrived with Bess she had three countrywomen for companionship, and a house full of others who never showed her the least kindness or courtesy.

…oh, dear. How terrible I was to leave her behind! But how could I have brought her with me? I couldn’t even tell her what had happened! And where could she have gone if I had?

Bertie starts and looks around. Owen is still cleaning the dragon bones. Bertie settles back down and quiets again.

For myself, at first, it was not so bad. For the first time, I became fond of Vivien, and I managed to make some slight entertainments for myself as well. There was needlework, of course, prayer cloths were not in fashion there, Beltisheim being completely devoted to Mithras, but I managed well enough. Vivien encouraged me to convince the swordsmaster to take me on – to do which I merely had to defeat one of his other students – and after that my days were full enough. I was not exactly happy to be there, but I endured. Until one day…

…NOW what shall I tell them? That my brother in law tried to unlace my bodice and stuck his slimy tongue down my throat? That he told me I wanted him to? I shall have to find some way to say it without saying it…

…in addition, I had been writing home regularly, although perhaps not frequently. In each letter I tried to tell how things were in Ancaster without writing anything too dreadful. In the letter, in onion juice (or lemon juice, when I could get it) I would write a codicil which told more detail, or bits of overheard news or gossip which I thought father would find of interest. If my letters out were infrequent, those that came in return were positively scarce. Some must have been lost between the time they left Whiting Arran and arrived at Ancaster (or, perhaps, between the time they arrived at Ancaster and the time they arrived at me… or the letters which went out were not delivered…) and here I was, already 15, and no news of Gwynneth’s nuptuals had reached me.

So I took it upon myself to run away from the Franklin estates, to return back home. Smuggling myself out of the house was no mean feat, so I took just a few things no more than could be loaded on the back of one pony, and my horse Minuial (a pretty chestnut mare, with a blaze on her face, such as you see all about. Long gone, of course, but she was a sweet thing and I do miss her). All my other possessions, as well as my maid, Bess, I left behind.

But how could I possibly hope to get all the way from Ancaster to Whiting Arran? I had grown up hearing that that Beltisheim was far safer than Eire, and that in Landsrue Town virgins could walk through the streets of an evening, wearing nothing but bags of gold, and none would touch them, but Grandmother had never mentioned a thing about such goings on as I had seen, and I was far from Landsrue Town.

I had thought, at first, to sell some of my jewels and hire some guards to accompany me. But I was doubly frightened to do so. I would make myself very easy to find by acting thus and I was certain Father would not be pleased at me throwing away my dowry. Besides, I had no idea how to go about selling gems, and was certain I could not get what they were worth.

So, instead, I put on some of Ewen’s cast off clothing (which I had brought with me in case I got a chance for some serious riding) and chopped off my hair and decided to hire myself out as a guard rather than hiring others…

And here I shall look imperiously at them and say… I told you I was a fencer. I may not have been up to a true professional’s standard, but in those days many a young man with far less ability than I had was taking up arms and calling himself a body guard.

So in boy’s dress, I made my way to Dunedain, and there I met a dwarven merchant called Donnegal who was heading back to Eagles Reach, and from there I knew it was but a short trip to Ramsgate, where my cousin Alistair, who was one of the King’s Justiciars, was sure to arrange for a proper escort… He hired me as a sell sword, but really as an odd-jobsman. It was hard work, but I knew, at least, that he would not penetrate my disguise…

At this point, Bertie falls asleep, and wakens a short time later when the Matriarch, who apparently used to be a cook, comes by to talk to Owen. 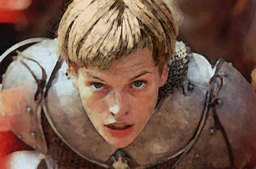